Hi there I'm after a couple of rods as I want to re-start coarse fishing. Not a lot in stock at the moment CV taking it's toll...
I stopped as a teenager when I moved North away from any coarse rivers, went to fly and sea fishing. A move South will put me in range of the R.Tees and North Yorkshire / N Lancashire / S Cumbria. Also my nephew is showing an interest and coarse pleasure fishing is more rewarding for youngsters than other disciplines so I'll need to get practicing to lead him on as he progresses. Just got him a Leeda GT-X canal whip as a starter...
Realistically he and I'll be fishing rivers, canals and mixed fisheries with F1's and up to middle-sized Carp. Mostly on float - waggler, chubber, stick etc. as I think that's fun. Probably not going the boilies / pellets / carp route (although I won't mind getting into one if its there) more the breadflake/punch, meat, hemp, tares route (we'll try and persuade his mum to allow maggots, pinkies, casters eventually ). Maybe roll some meat for Barbel?

Days gone by I would've just gone for a 13ft float rod and an Avon, or a single match rod probably by Shakey... But (my God) the choice now is insane and Match rods seem to come in many flavours, Waggler Stick Lite Power etc.

I read good things about the Shakey Mach 3's but they're discontinued. I've not time for the minefield of 2nd hand even if bargains lurk. Stock seems to be an issue in this Covid world but I've found both a Shakey Agility 2 13ft Match Lite Rod and an Agility 2 13ft Power Match Rod. At £50ish each, seems a pretty big discount? Is it a good deal? £50-75 each is the sort of budget I'm looking at to get me going and maybe pass on to my nephew when he graduates from the whip...

Questions (if you don't mind) -
Are the Agility 2's as good as the Mach 3's were?
Will those sort of rods cover the fishing I've described? The Lite for skimmers to Chub, the Power one for Barbel, F1's etc.
Any better suggestions at that price point?
Will a "power match" handle Barbel trotting rolling meat?
Also while I don't want to focus on Carp will the power match cover a pellet/feeder waggler at a pinch if I avoid big fish venues?

Thanks in advance. I have done a forum search, but wouldn't mind more current opinions.
Last edited: Mar 19, 2021

The shakespeare rods are good , but before you decide I would have a look at the Daiwa Ninja rods, or the Preston Innovations lower end range of rods ,these get a good write up. Others to put in the frame are the Shimano forcemaster and beastmaster, I think the beastmaster may be just above budget.
For my pellet waggler fishing I use a Daiwa Harrier, the predecessor to the Ninja, best £35 I spent on a budget rod. Also use a Garbolino Maxim, for normal waggler work, but will still fish pellets with it i use a Shimano Aspire.
W

Thanks for replying. I'll look at those options. The more the better as currently stock levels seem low.
C

Hey @wrongfoot
Great to hear you're getting back into your fishing.
I'd suggest a Middy Trinity 13ft Rod. Little outside your budget but meant to be a very nice rod indeed and the blurb seems to match all your criteria. I'd buy one myself but I've too many rods!

Again I'm a bit outside your budget but one of these should see you right on the Barbel front in the 13ft Model: 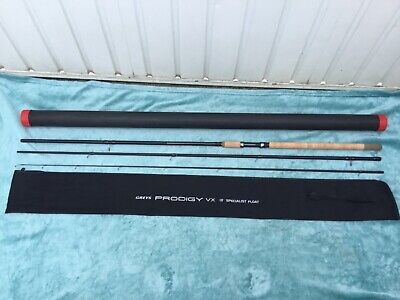 For your nephew, you wouldn't go far wrong with a John Wilson Mirage Rod for the money:

I’ve had 2 Shakespeare rods in the last 5 years. One has been fine and a bargain for the price. The other however snapped on first use, and though I eventually got refunded from the seller, I discovered Shakespeare’s customer service barely exists.
As mentioned above the budget Daiwa rods are very good quality and having also experienced their after sales service I can heartily recommend.
W

Thanks both for the kind advice and links. Really useful as I'm suffering from indecision...
C

@wrongfoot here is the Middy 13ft Trinity in action.
Looks a smashing bit of kit........

Hi,
i am looking for a Float rod, and I have come across the Shakespeare agility 2 13ft lite.
Just wondered if any body have had any experience with this rod or know anything about it?
I am planning to be using it for trotting on the upper Bristol Avon.

Any advice will be much appreciated!
Cheers