How did you get on?

Three tench for braving the cold, occasional rain and hail. 4lb 2oz, 5lb 2oz and 5lb 4oz and all on the pin.
W

Well,yesterday,I went to a club lake that supposedly has lots of tench in,fished it four times now and caught two,not many there yesterday(4)with the poor forecast,by lunch only me left,I sat there with one bite(missed)several indications on the float,some bubbling,definitely fish,I saw two good grass carp glide through the swim in midwater,anyway apart from a few showers and a very strong wind it wasnt too bad....until around 3pm when a very dark line of swirly cloud appeared to my left(NW???),after a while a few prolonged claps of thunder and the line of cloud had moved slowly nearer,after an hour the wind died and the heavens opened,for an hour I sat under my brolly with a plastic sheet over my legs,with the raindrops bouncing three inches back out of the lake,lightening forking right across the sky above,incredible,then as suddenly as it started the rain stopped the sun came out,but still with thunder and lightening out front,I decided packing was in order as in the distance behind me was another black cloud,anyway,I cast my float out as far as I could to clear the line and wound it straight in,I was about to lift it to find resitance and a five ounce perch had taken the grain of corn to save the blank,couldn't help but chuckle.. 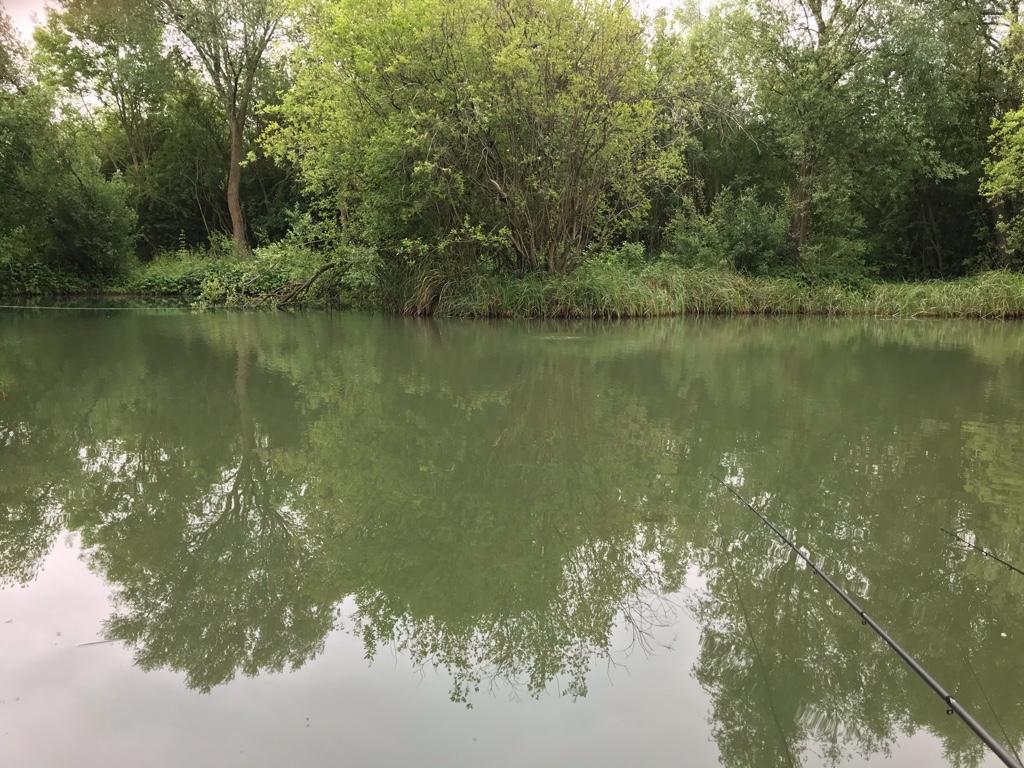 First day of my week off, I’d planned to get up at 7 and go fishing. 4:30am I’m awake, thought to myself ought to grow up a bit and go back sleep. Well that lasted another hour and I thought 5:30 is near enough to 7 for me.
Choose one of my favourite pegs and was promptly told that the lake wasn’t fishing by one of the overnight carpers on the car park.
Nice dry but over cast start to the day. Fished the waggler about a rods length out but two lengths to my left as there is no other peg there.
Double red maggot was the bait of choice, loose fed the same. Had a few 8oz bream and a small fingerling chub, which was a surprise. I switched over after the waggler went dead onto a hybrid feeder and micro pellets with a 5mm wafter. By now it was belting it down so I was sheltering under my brolly with streams of water running off all edges. Had another small bream, just as the rain stopped my rod about shot out of the rest as a carp decided to sample my bait. My new feeder rod is a little softer in its action than my last, but it handled itself very well if not better than the other. A brief but powerful scrap gave me a nice ghost carp I didn’t say it but I’d imagine around 6-7lb ? Lost a few more after that around 12:30 I decided to beat a retreat before the next deluge, which hit just as I’d finished packing up.
Very pleased to have caught after my recent row of blanks ! 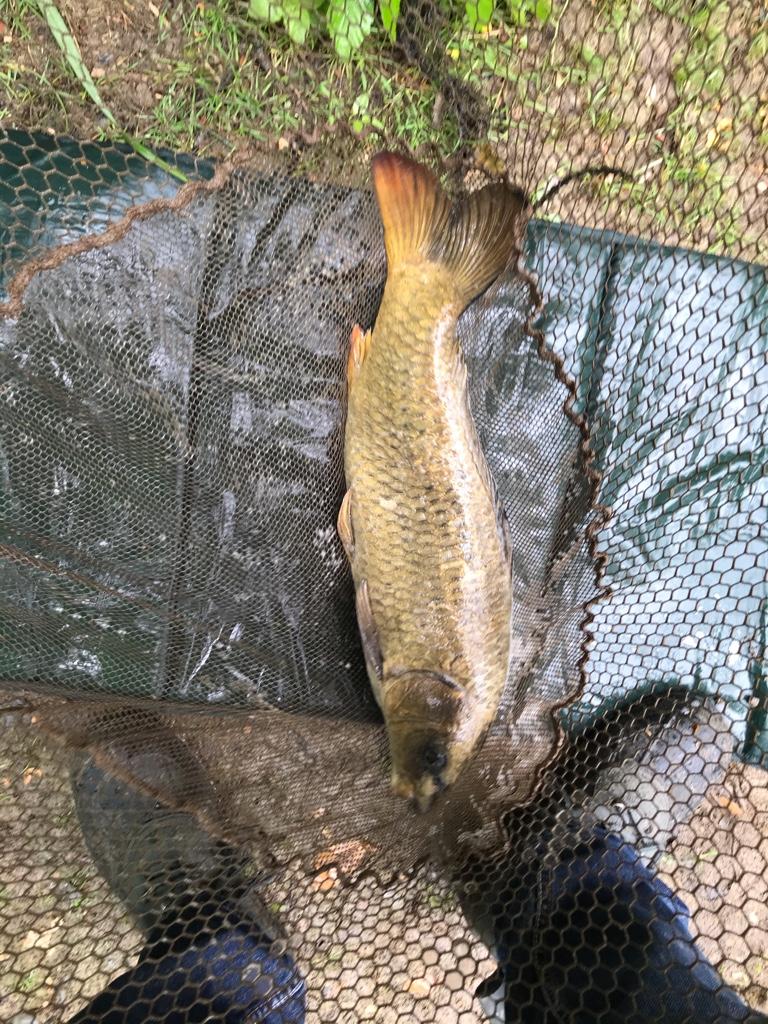 Ok so I had a 3 hour session on our association water today it’s the first time I’ve fished it but it’s a 7 minute drive from my house so nice and close.
I was the only one on the bank so I was a little sceptical but as it turned out I didn’t need to worry.

Maggots were used and I caught hybrids roach Rudd

And this little fellow

All in all chuffed
G

Absolutely pi$$ wet through during yesterday's work party, hot and bothered the week before and just hoping for a steady day next Saturday when I might even choose my peg for the following Tuesday. https://www.coorsanglingclub.com/

It was quite cold yesterday morning when my mate and I arrived at 7am on the canal at Apsley. Saturday’s rain had obviously swollen the nearby river Gade as there was sufficient flow to use stickfloats. Mate and I set up and started on punch, small roach and dace readily biting. A switch to maggots had a similar response. As the day progressed it became apparent the bigger roach and perch weren’t feeding, why is anyone’s guess? We both had a problem with an enormous pike attacking our keepnets at least twice, it really was a whopper..
We stayed until 2:30 when the rain clouds started to look threatening.

Had three hours on the Club's crucian lake this morning. Quite mild but a bit windy. Sat down on this peg, and fished expander pellet tight to the lilies at 8 to 9 metres.

Began to pick up little crucians steady for the first hour.

Then the tench poked their heads out.

I had five around this size, plus a dozen bars of soap

In addition I got a slack handful of these:

Always nice to see. I finished up with 78 fish on the clicker, and went home feeling quite content after an nice comfortable session. This crucian fishing can get addictive. Pete

With showers forecast for the next couple of days it was good to get a few hours in today.

My usual venue on the estate, will be glad for a change of routine come the 16th for some river fishing and hopefully if the wind changes some trips to the coast in search of bass.

Just as well this lake is set in such a wonderful setting that just sitting there is a joy because the fishing is hard work. Skimmers, followed by small roach and then more skimmers, lots of skimmers. Finally a beautiful bar of gold made the day. 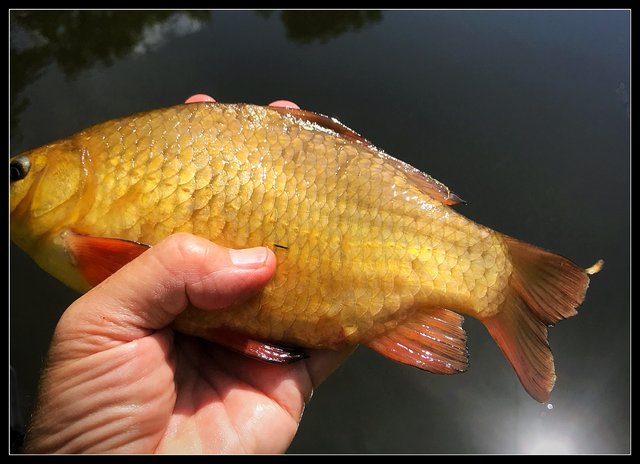 The tench seem to taking social distancing to the extreme with another day unseen.
Last edited: Jun 10, 2020

Gordon and I decided to try a new venue which was postponed from last Friday . We arrived at 5.00 am( don't know why we bothered) and saw this.

It oozed fish ie tench, roach, carp , perch and bream , in fact, all the fish the club book described as being present. Certainly carp were cruising around and congregating in numbers far from us but we caught nothing. I had 2 rods out and not a nibble. Gordon fishing the float and suffered the same fate. Lovely setting but poor results. We both blanked. Neither of us had any idea why and felt deflated after 9 hours of failure. Me I could understand but not Gordon.

It was a shame but part of fishing. There is always another day. I did hook a carp on floating bread which spooked the whole lot and I'm sure it was foul hooked as it felt strange and the hook pulled after a couple of minutes.

All that glitters is not gold Mike. Having said that, you go back on another day and bag up!

I have a feeling that won't happen John for two reasons ; 1. I suspect that the fish are not there in the numbers claimed and 2. I doubt I will be going back.
W

One has to keep ones spirit up. Gordon there is always Friday .

Back to the ponds at Frisby again this morning, arranged to meet my brother there. We’d already decided on the pond we where going to fish but it was quiet busy so we opted for the match lake. 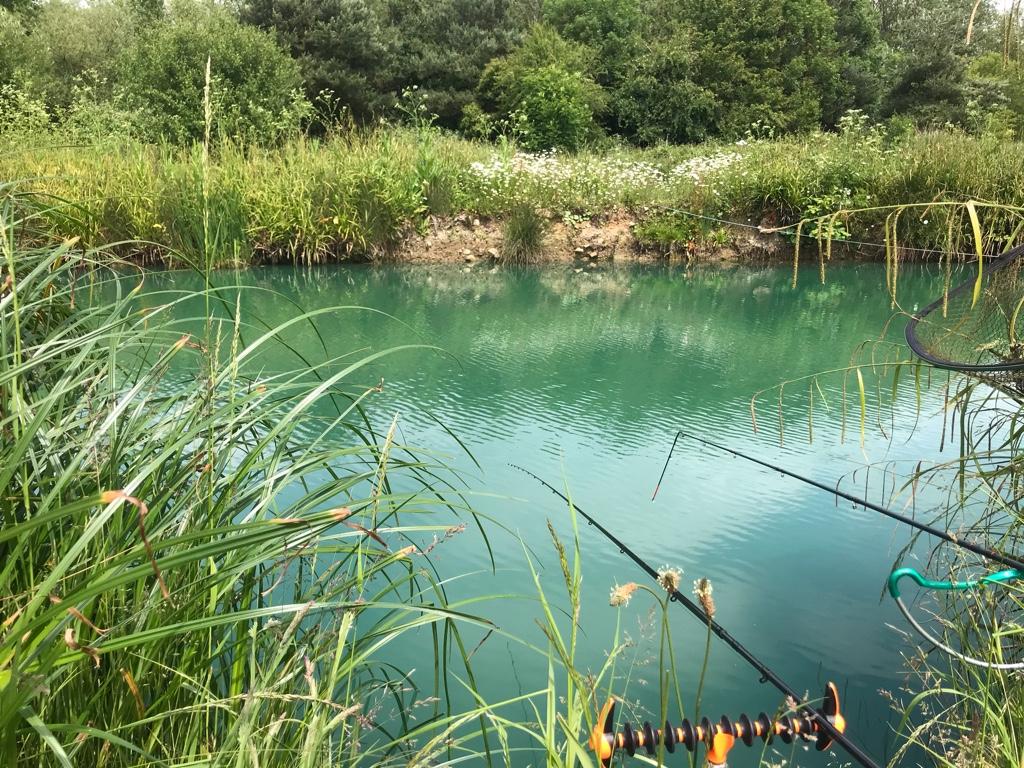 I had a real mixed bag of fish and techniques today. Hybrid feeder, swingtip and free lining. Had a couple of carp off the top on floating dog biscuit. A fair few bream all around 1/2lbc, from both the hybrid feeder and maggot feeder on the swingtip. Casting right to the island almost was most productive with the maggot feeder, I was getting bites before the feeder had hit the bottom on a couple of occasions. These where chub I think as I landed 3, it went quieter by about 12:30 but we stayed the afternoon catching the odd small carp, I had a screaming run that snapped me off before I’d had much of a chance to do more than lift the rod out of the rest.
Definitely a day to remember for a while at least. 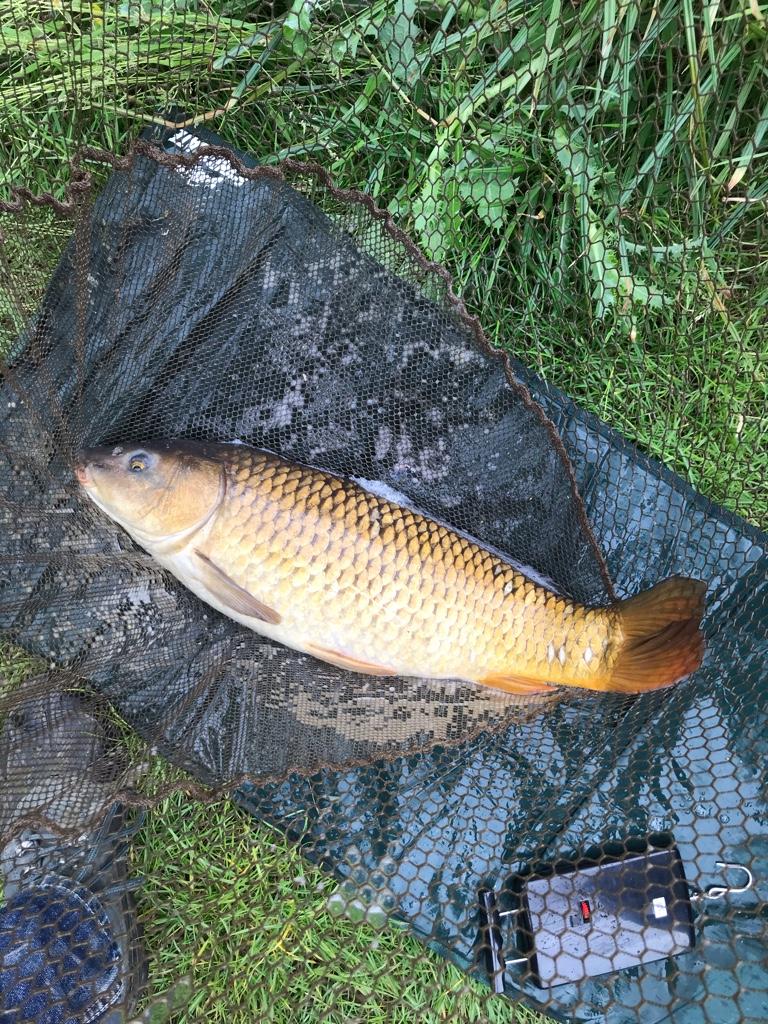 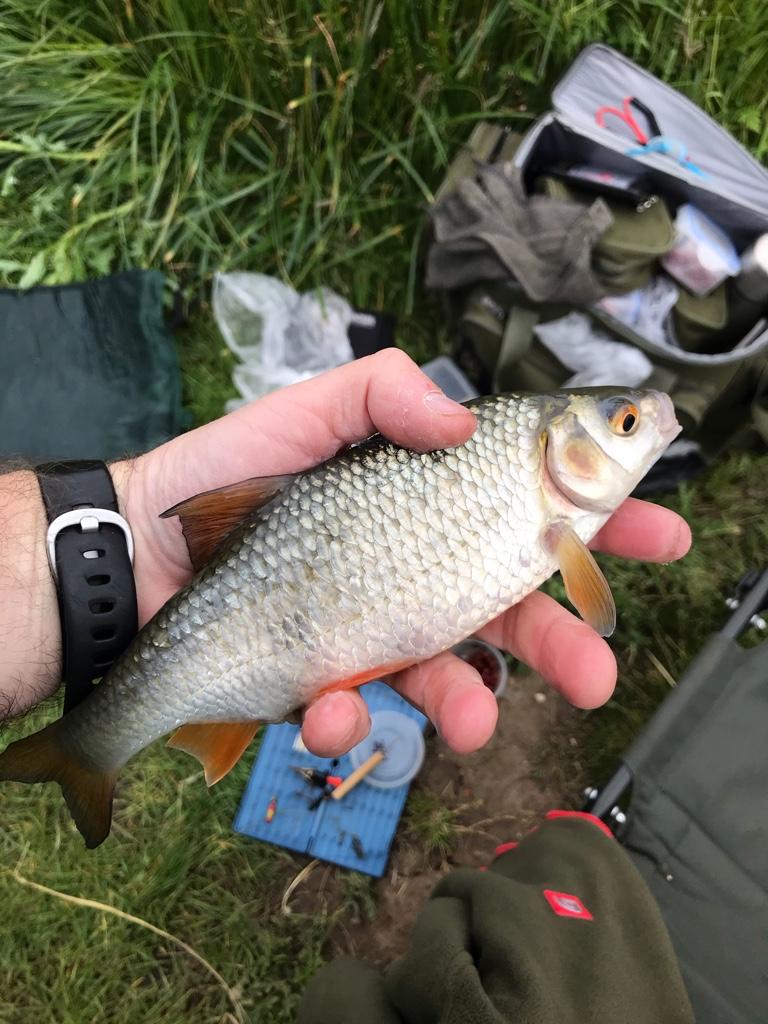 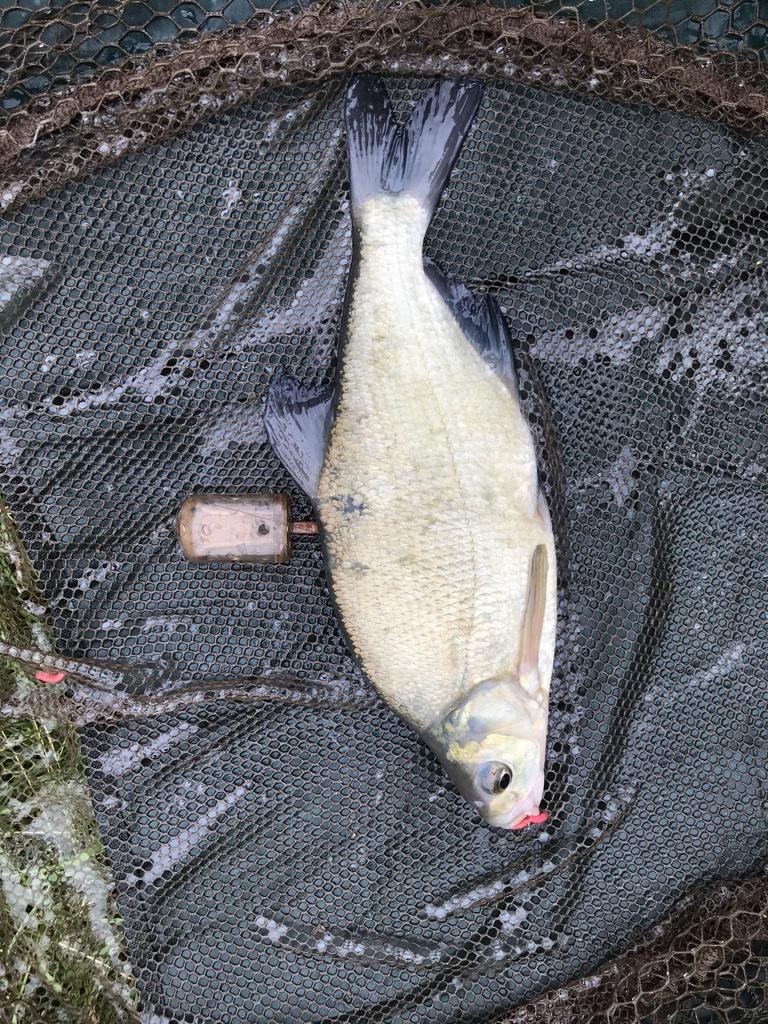 An evening after carp from the top. I have never seen the club car park so full, late start but the only thing I’ve caught so far is a duckling, size 4 barbless straight through the beak. I didn’t trouble to weigh it. 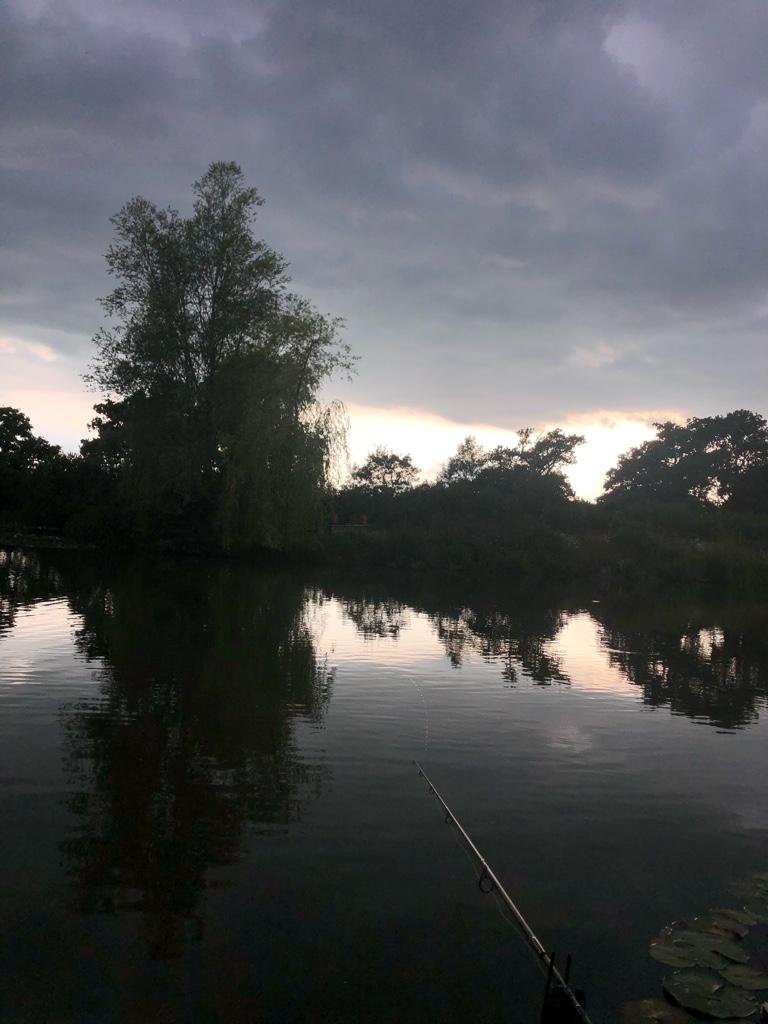 Sent from my iPhone using Tapatalk

Went back to castle dam for a couple of hours yesterday evening
Tried a small ground bait feeder with maggots ....... I had to wait for bites but the fish were worth waiting for.........

At the fishery for five thirty am, had a call from mick as I got there, he had lost his way and needed directions, I only took him there on Sunday but he had turned right instead of left so missed it.
First time here on this pond, but we had heard it was good for tench, the best eight pounds, which is big for round here.

Tackled up with same rod and pin, drennan glo tip float to a size twelve Qm1, with a quick stop on the hair, was going to try the worm kebab I’d been hearing about, which is short pieces of worm threaded onto the hair with the quick stop, so that it leaks the flavour and juices from the worm.

First fish was a small Rudd, and I then had three small tench, before catching a couple of better ones, so the method works, it was slow fishing after a cold night, it’s only about three feet deep, so soon cools down, it felt cold as well till about ten o clock when it warmed up a bit, I believe it fished a lot better yesterday when it was warmer. One chap showed me a photo of a twenty five pound carp he had caught here last year, so some big carp as well, not the nicest fishery I’ve been too, it’s noisy with the industrial units near here, but plenty of tench. And now I can’t put any photos here, it’s saying no photos or videos, is there a reason for this.

Location
Stuck on the chuffin M25 somewhere between Heathro

Ribs still very sore so I thought a break ( !) from the decorating might do then some good so off to Marsh Farm to try for a crucian. Late start...didn't get there till nearly 1pm intending to fish until dusk. Phil arrived shortly after with the same plan.

5 hours later without a bite between us and no sign of fish at all the 9pm finish was looking a little daft.....then a fish rolled right over Phil's bait. For 15 minutes the odd fish rolled and I had 2 bites...2 crucians, 1 just under and the other just over 2lb. Then the rolling stopped so I gave it 30 minutes and packed. When I left Phil was still there hoping for a mugfish.

Bailiff reckons its been right off for the last week. Goodness knows why because the conditions were cock on.