What passes now for a ‘Close Season’ is upon us and like most coarse anglers my rods have been put away for a few weeks at least. It’s a good time to reflect upon the last season and look back at some of the angling highlights. Rather than bore you all with my own captures, which have, with the exception of that stunning tidal Thames roach, been somewhat modest, I thought it would be interesting to ask some of my colleagues at the Angling Trust for their reflections.

As you would expect from an organisation dedicated to promoting, defending, improving and enhancing fish, fishing and fisheries most people who work at the Trust are mustard keen anglers just like those we seek to represent. 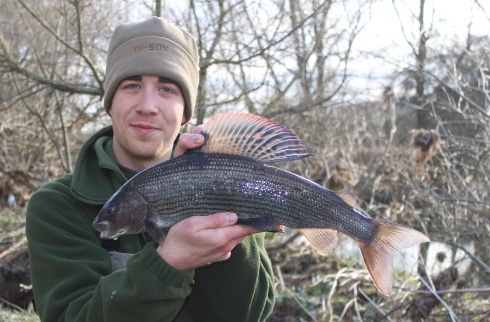 James Champkin – Clocking up the miles for a big Scottish grayling

James is an all-rounder but classes himself as an out-and-out specimen hunter, travelling all over the country and racking up thousands of miles every year in his search for big fish of all species. In doing so, he has accumulated an impressive list of personal bests, including a 17lb 2oz bream, 4lb 4oz crucian and 3lb 2oz rudd.

Sitting here in the warmth of my office and reflecting on the last season’s angling, it feels like a very up-and-down affair – but then that’s the nature of specimen hunting. Long, disappointing periods punctuated by spells of euphoric success. In reality, I have enjoyed an amazing twelve months with one or two real highlights.

It all started at the end of last February when a long drive to fish the wild rivers of Scotland resulted in a new personal best grayling of exactly 3lb. I had spent the previous couple of winters in search of exactly such a fish, and so to finally achieve that milestone (and after a 600 mile round-trip!) was incredibly rewarding.

Skipping forward a few months, while tench fishing on a large reservoir in early June I found the fish in an incredibly frustrating mood. With temperatures approaching 30 degrees I thought the carp on a neighbouring lake might be obliging, so off I wandered with just a rod, net, unhooking mat and bucket of mixers.

Finding a number of carp in a shallow bay, I soon got several fish feeding confidently on floating trout pellets. It didn’t take too long to hook one, and as soon as I did all hell broke loose. To cut a long and rather terrifying story short, I soon found myself up to my chest in water, having slid down the steep banks surrounding the lake, doing battle with an enormous mirror carp under the rod tip. Eventually I just piled on the pressure and bundled the fish into the comparatively tiny net – and this fish just seemed to grow and grow. It was far and away the biggest freshwater fish I’d ever seen in Britain and I was trembling like an autumn leaf. At 50lb 6oz, not only was it a new PB by a huge margin, it was a new lake record and one of the largest carp ever caught off the top! 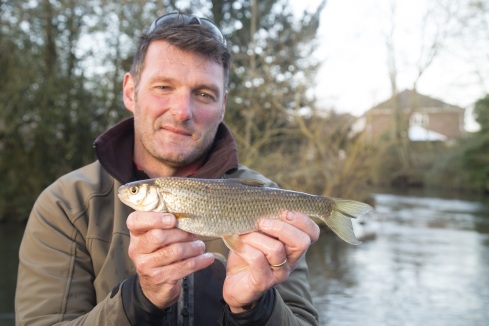 Rob Hughes is the manager of carp team England and an internationally known carp angler. However, when not fishing for carp, he can be quite a dab hand on the rivers.

As a carp angler, this winter has been appalling. In fact I’d go as far as to say that it’s been the worst carp fishing winter that I can remember. Although not seriously cold, very few people have been regularly catching fish, and those that have, don’t really know why. For that reason, and also because I simply have to have a fishing fix whatever the weather or conditions, I’ve been concentrating on the rivers and catching all manner of different species, primarily on the stick float.

Grayling were the early winter species, and they really did oblige. When you are on them the action can be amazing. As the weather got colder I headed for perch, and a river perch is an amazing creature too. As the winter wore on it has been roach and then more recently chub, but for the last few weeks I’ve been targeting that most overlooked creature… the dace.

A 10oz lucky capture started my hunt, and I increased that with a 12 oz fish a few weeks later. I’ve recently managed to “up it” again with this amazing 14.5 oz specimen, and am hopeful that, with just a couple of weeks of river season left as I write this, that a 1lb plus fish might come my way.

Believe me if it does, you’ll probably hear the scream from wherever you are. Once the river season’s passed it’ll be carp time again… and they’ve just started feeding too. 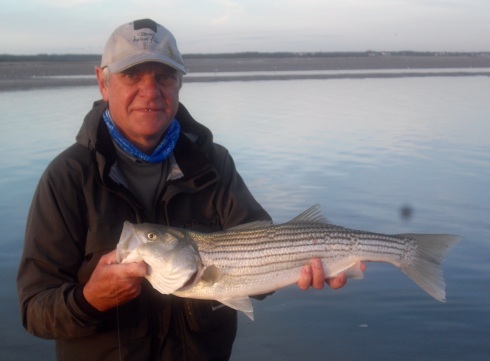 Nick Simmonds is better known for some impressive catches of barbel from his local river Wye but these American striped bass have given him the travel bug.

Nick Simmonds – Striped bass have given me the travel bug

Nick is an all-round angler whose roots are in coarse fishing but he’s just as happy with a fly rod in hand and used to have a boat for sea fishing in and around Poole Harbour. Nick’s targeted approach to his fishing has brought barbel to 14:02, chub to 7:14 and tench to 10lb, although one of his favourite captures remains his solitary bonefish.
Like many things, angling has its ups and downs and for some reason the current coarse fishing year has seen me in a bit of a trough rather than on the crest of a wave – Hence the photo of a sea fish! After some enjoyable springtime forays to Llandegfedd reservoir, nymph-fishing for rainbows and the hard-fighting blue trout, I started the year’s tench campaign at the beginning of May on a big gravel pit in the Cotswold Water Park. Suffice to say that after four weekends on those banks I had only two bites and just one tiddler tench of about 2lb to show for my efforts. Stark contrast with last year, when I had 40 tench from the same swims over a similar period – but that’s big pits.

Living near Hereford now and having become too lazy to rush round the country for my fishing, I’m lucky enough to spend much of my angling time on the middle Wye. This year’s barbel fishing got off to a bit of a slow start with consistently low river levels, but picked up somewhat once we had some water to flush the river through. I had a really enjoyable chub-fishing session shortly after Christmas with a nice bag of float-caught fish, topped off at the end of the day with my Wye best at 6lb. I really must leave the barbel rods at home sometimes and have a go for the big perch which are becoming more prevalent throughout the Wye.

September saw me heading to Cape Cod in search of my first striped bass. My companion Robin and I caught a lot of these cracking fish and had a great trip. We learned a bit about some of the many bassy areas and I’ll be back one day in search of bigger stripers. I’m well and truly bitten by the travel-fishing bug and I’d love to take a proper tropical flats trip one day. 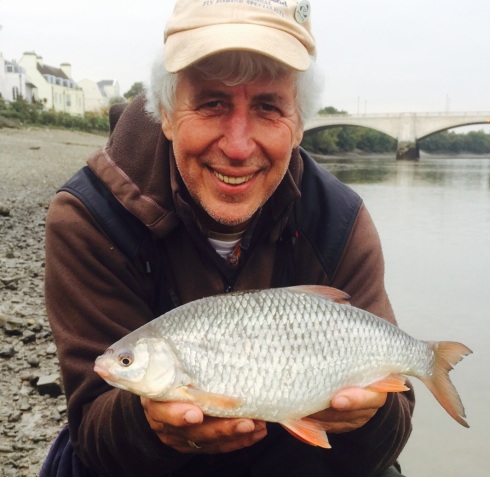 There’s no doubt that the highlight of my year was my first ever two pound roach from the Thames, caught in the middle of London !