FishingMagic Magazine
Home Features Martin Salter: Spice it up a bit with something new! Having reached the grand old age of 65 earlier this year it’s probably fair to say that it’s going to be rare for me to experience anything particularly new when it comes to fishing my local rivers. I remember when swim-feeders first made an impact on the Thames – crude homemade objects constructed from solid plastic tubing and plumbers lead with the maggots held in place by a big lump of soggy bread-flake. All a far cry from the vast array of clever products that now adorn the tackle shop walls but my goodness were they effective. I’ll never forget the day I watched opened mouthed as two London anglers hooked barbel after barbel from the edge of the flooded lock cut downstream from Bell Weir on the Thames. Granted the occasional whiskers would get caught on this stretch but multiple bags were virtually unknown.

Learning new ways to catch mullet in the harbour

That night my friend Ian and I rushed home and searched our father’s garages and sheds for anything that might help us construct this new ‘wonder method’. It took us a while to get the hang of feeder fishing and we learnt a great deal from watching talented match anglers such as the Thames legend Jack Varndell and the A.4 team. But it’s fair to say that the swim-feeders revolutionized fishing for my generation as much as the advent of the fixed spool reel had done for the one before.

So what on Earth is likely to have such an impact on my fishing after 55 years of spending probably far too much time on the bank trying to catch anything with fins – surely I’ve seen all to there is to see by now?

A fair few old stagers will tell you there’s nothing new in fishing. They will point out that good old fashioned cheese-paste was a commonly used milk protein bait long before Fred Wilton invented his super boilies. That elderberries, sometimes preserved in formaldehyde solution, would catch roach all summer long many years before Bait Tech started selling us those convenient tins of ready cooked tares to use with the timeless hemp-seed. And of course the old fellas are partly correct but then they probably never tried to catch a mullet.

It was sometime in the late 1970’s that I first experienced the obtuse nature of mullet. I was on my second trip to the famous Royalty Fishery on the Hampshire Avon and was fishing the tidal section just above the bypass bridge. I’d had a few barbel on trotted sweetcorn – maggots were banned in those days – but the swim appeared to die as the water rose and the flow dropped off. I wandered downstream and suddenly caught sight of a mass of grey shapes, which I assumed were chub, holding station in a near bank slack some twenty yards away. A dense reed bed stopped me getting a closer look but these fish were still within casting distance. 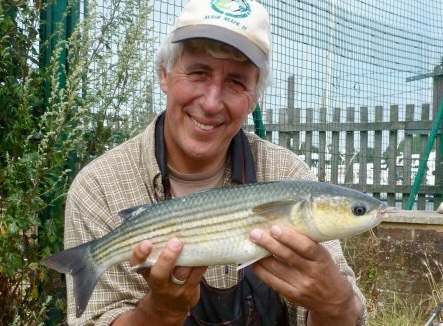 Two hours later and having drifted and bounced every bait in my box past these poxy things I gave up as not once had they shown a flicker of interest in my offerings. It was only after telling my tale to the bailiff that he smugly informed me that the big grey shapes were in fact mullet not chub and that they were ‘uncatchable’. That was that for the next 20 years and I gave them no further thought. Life was too short and there were plenty of more obliging species to target.

Fast forward to the next century and the demands of my job as a Member of Parliament meant that there was a lot less time for fishing. However, I did by now hold the title of Parliamentary Spokesman for Angling – a wholly advisory position – and this saw me receive frequent invitations to address various gatherings of anglers. And so it was that I found myself driving down to Portsmouth to present the prizes at the AGM of the National Mullet Club. Clearly, these were either a bunch of patient but completely unsuccessful anglers or, more likely, mullet were in fact a good deal more catchable than those ‘grey ghosts’ down at the Royalty.

Not sure what expect as my saltwater angling experiences at the time were confined to a couple of mackerel trips and a solitary shark expedition, I was pleasantly surprised to discover that the Mullet Club guys were in fact a delightful bunch of skilful all rounders. I soon learned that the thick lipped grey mullet was a highly visible lover of estuaries and harbours that often took bread flake on the sort of conventional coarse tackle that was used for chub fishing. That I could do in locations a little more than an hour from home and so it was I became a mullet enthusiast. I attended a couple of the Mullet Club Fish-Ins, learnt a few good tricks and venues from the experts and even found some decent spots on my own. I quickly fell in love with these hard fighting, silver torpedoes that were trickier than chub but still a viable angling prospect. All was good and another string was added to my fishing bow.

Just as one problem is solved so another emerges. There are three main species of mullet the two largest being the thick lips which grow to over ten pounds and the tin lipped which top out at around eight pounds. Apparently, it is possible for the practiced eye to tell them apart in the water but I couldn’t back then and still can’t to this day. After some initial success with mullet this inability to know what I had in front of me led to the same sort of frustration I had witnessed as a young man all those years ago on the Royalty. I found out the hard way that the thins rarely take bread, or indeed any bait presented in the conventional manner. Several times while estuary boat-fishing I witnessed huge shoals of mullet literally swimming through my carefully presented bread ground-bait as if it wasn’t there. Twice on holiday in France I had large numbers of mullet in front of me but couldn’t buy a bite.

I’d heard about spinning for thin lips with a baited spoon and tried it myself last year using the Isome rubber worms behind a Mepps spinning blade but without success. Time to ask the experts I thought but with winter approaching I put any such plans on hold. As it happens I enjoyed the most spectacular of starts to my fishing in 2019. I had some great chub fishing at the back end of the season, a fantastic trip to Colombia after peacock bass and the amazing payara or ‘vampire fish’ which I’ll write about another time. This was followed by the best gravel pit tench fishing in my life in which I finally broke through the double figure barrier. All of this meant that it wasn’t until mid-July that I found time to try and crack my personal thin-lipped mullet conundrum.

My part time job with the Angling Trust has its frustrations but it does mean I get to meet some bloody good anglers – some of which even turn into friends. It must have been 2015 when Chris Turnbull and I attended the first Association of Crucian Anglers event at Godalming’s Marsh Farm fishery to promote the conservation of this delightful little species. I found myself fishing next to Giles Cawston and we got chatting as you do. Giles is a lovely bloke and we hit if off straight away, and he is also a knowledgeable and highly successful fisherman. Although now living back in his native Suffolk, he spent many years in Hampshire and Dorset learning how to catch the bass, mullet and sea-trout that swim the southern estuaries and harbours. 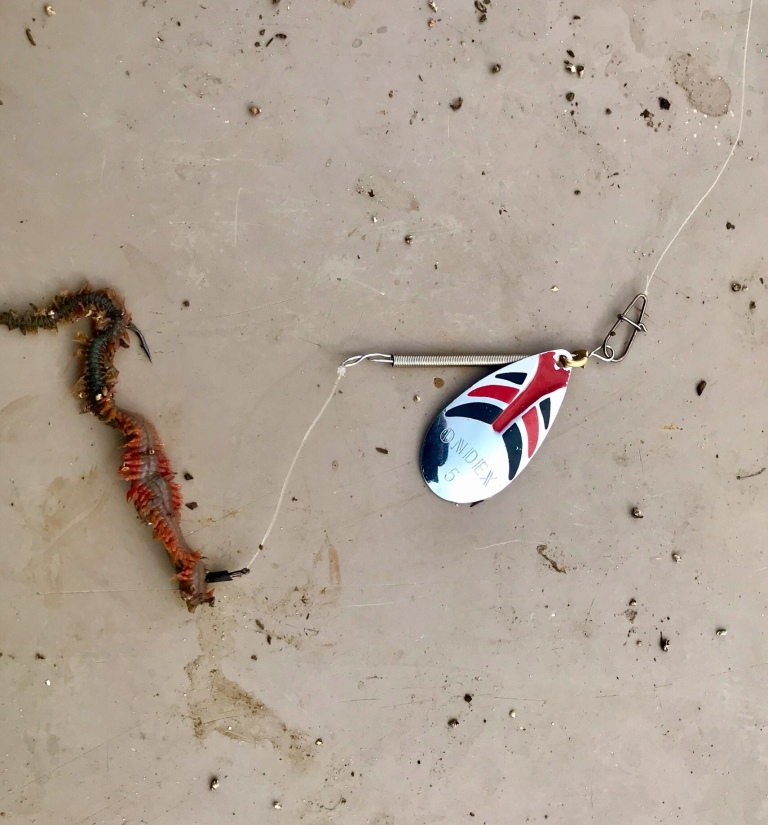 Every year Giles likes to hitch up his boat and return to his old stomping ground and this time Chris and I were lucky enough to be invited to join him for a day on Christchurch Harbour. Having purchased our tickets and worms we met at the slipway and with Thames Water’s Angling Manager Will Barnard making up the foursome we motored up river in two boats as the tide flooded in. Our rigs were tied exactly as Giles had instructed. Rather than Mepps we had Ondex No 5s with the trebles removed and a three to four inch, stiffish fluorocarbon trace attached carrying a size 1 worm hook onto which was threaded a section of fresh ragworm. The books recommended a No 6 but Giles rightly reckoned that a longer shank and wider gape delivered straighter worm presentation and better hook ups. Later on I added a No 10 Kamasan 583 up the trace, secured by an adjustable silicon sleeve, so that I could rig larger pieces of worm and still hold them straight behind the spinner blades on the retrieve.

Bent rods and screaming clutches – what’s not to like about mullet fishing ?

We were quickly into fish and every now and then the small taps turned into hook ups from little bass, and, when the clutches screamed, a super charged mullet. In the clear water we regularly saw mullet following the bait and turning away from the boat at the last moment. But by varying the retrieve even a few of these wary fish were persuaded to grab hold of the worm.

A perfect day on the thin lipped.

It was one of those perfect days when almost everything went plan. I had 13 in total and Giles landed a similar number. I don’t recall either of us losing a single fish and by keeping on the move we found pods of thin lips in a majority of the spots we tried. By contrast the guys anchored up and trotting bread for the thick lips were having a lean time. Up until that point I would have been one them – sitting there getting increasingly frustrated as the ‘wrong’ type of mullet drove me to distraction.

As you might have guessed I’ve become a convert to the baited spinner and I am thinking how it might work from my new little fishing boat which is soon going to be helping me hunt for perch, pike and chub on my beloved River Thames. I can also guarantee that it will also be heading south in the near future for some more thin lipped action.

My new boat was bought with mullet in mind

So my advice is to spice up your fishing with something different – it’s never too late to learn some new tricks in this wonderful world of fishing that we all inhabit.